AFRICA IS READY FOR THE CORONAVIRUS

In this photo taken Thursday, Feb. 20, 2020 2020 testing kits are displayed on a worktop in Johannesburg where a workshop was held for delegates from across Africa on laboratory confirmation of COVID-19 in suspected human cases. Across Africa, steps are being taken to prepare for and to reduce the effects of the spread of the new coronavirus. (AP Photo/Denis Farrell)

DAKAR, Senegal (AP) — Across Africa, steps are being taken to prepare for — and to reduce the effects of — the spread of the new coronavirus. Testing laboratories are being supplied, quarantine and hospital treatment facilities are being readied for patients, and public health advisories have been issued.As of Monday, the continent of 1.2 billion people has eight confirmed cases of COVID-19 — three in Algeria, two in Egypt, one in Tunisia, one in Nigeria and one in Senegal.

The case in Senegal was a French citizen who resides in Senegal and who had recently returned from France.But 13 of Africa’s 54 countries have been identified by the World Health Organization as at risk of becoming centers for the disease on the basis of volume of traffic between China and weak health surveillance and treatment systems.

Nigeria on Friday became the first country in sub-Saharan Africa to report a confirmed case when an Italian citizen traveling from Milan on a business trip fell ill after arriving at Lagos, Nigeria’s largest city with 20 million people. 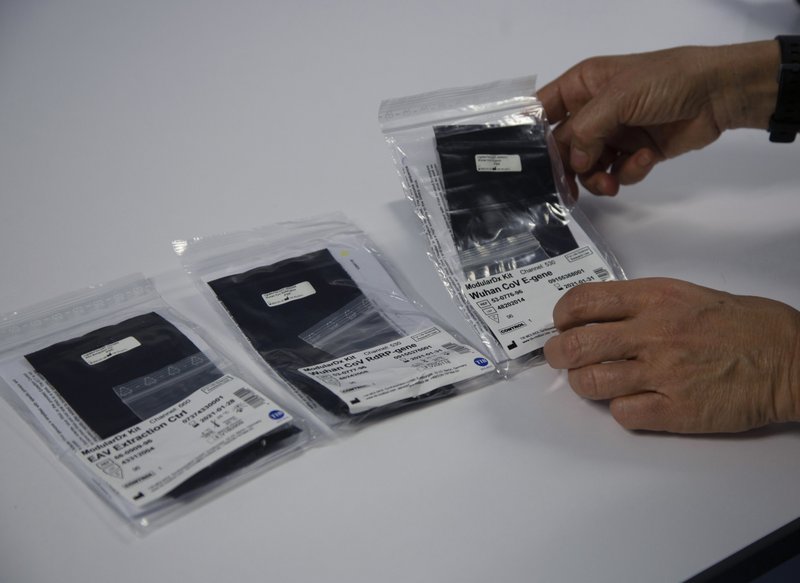 With the case in Nigeria, concern has grown over the virus spreading to countries with weaker health systems.

WHO officials in Africa, where some countries are already battling outbreaks ranging from Ebola, to malaria and measles, have warned that the continent’s health systems could be overwhelmed.The new virus, first detected in China, has infected more than 89,000 people globally and caused over 3,000 deaths.

The Africa Centers for Disease Control and Prevention has hurried to train its 54 member countries in testing for the virus. At the start of February just two African countries had the capability to test; now the number is more than two dozen.

Most African airlines with direct flights to China suspended them, and countries activated surveillance and quarantine measures.However, Ethiopia, one of Africa’s largest air traffic hubs, has maintained regular flights to China. Ethiopian Airlines said Monday that it has continued to operate 35 flights a week to the Chinese cities of Beijing, Shanghai, Guangzhou and Chengdu, as well as to Hong Kong.

Since Jan. 24 more than 220,000 passengers have entered Ethiopia through the main airport in Addis Ababa and have passed through screenings, according to a statement from Ethiopia’s health ministry on Monday.

More than 5,400 of those travelers were from countries that have reported COVID-19 cases. Twenty travelers with symptoms were tested for the new virus and all proved to be negative. Health officials are monitoring 875 travelers, including those with a history of travel to China, South Korea, Japan, Iran and Italy.

Many African countries had experience with trying to prevent the spread of the devastating West Africa Ebola outbreak that ended in 2016. Global health experts point to that as a sign of preparedness in this outbreak. The Africa CDC was created in response to the Ebola outbreak, and many countries established public health institutes.With the new virus case announced in Nigeria, Africa’s most populous country with 190 million people and numerous air links around the continent and beyond, other nations warned of possible spread.

Still, the World Health Organization has said that 80% of people who catch the new virus will only experience mild symptoms. The death rate is about 2% and the disease appears to be most severe in people over 60 with underlying health problems like diabetes and high blood pressure.

So far there are no confirmed cases of the virus in East Africa, where authorities in recent days have sought to scale up their preparedness efforts as the death toll from the virus has gone up around the world.

Regional governments, which rely heavily on trade and business ties with China, are scrambling to take measures that control the spread of the virus but may harm their economies.Uganda is monitoring four patients isolated over the weekend after arriving in the East African country. The four, whose nationalities have not been revealed, are in an isolation ward at a hospital near the international airport in Entebbe, about 28 miles south of Kampala, the capital of over 2 million residents, according to Emmanuel Ainebyoona, a spokesman for Uganda’s health ministry.

More than 6,000 Chinese work in Uganda, many of them employed by Chinese construction firms contracted to put up infrastructure projects such as dams and highways. Others run businesses of their own, including in manufacturing and trade.

A spokesman for the Ugandan government agency in charge of roads told the local press over the weekend that the outbreak had “slowed down” public works as workers are quarantined or remain in China.Uganda’s health ministry is urging people to “avoid hand-shaking and hugging at all times.”

The directive is reminiscent of the country’s efforts in the past to combat outbreaks of Ebola, a much deadlier virus that has tested health systems in Africa because it requires strong surveillance systems to catch it, the isolation of contacts to contain the spread and cooperation from local communities to adopt prevention measures.

Other African countries are taking similar measures.Kenyan President Uhuru Kenyatta on Friday ordered that a national isolation and treatment facility be completed within a week.

The country’s High Court ruled the same day that all 239 passengers who recently arrived on a China Southern Airlines flight should be found and quarantined at a military facility until declared free of the virus. The court also suspended all flights from China for 10 days.

South Africa — whose government is set to evacuate 151 citizens from the Chinese city of Wuhan — has said two citizens who had been working on the Princess Diamond cruise ship have the virus and will stay in Japan for treatment.

South Africa’s National Institute for Communicable Diseases said Monday that it has tested 160 people for the new virus and all have been found negative.

By Rodney Muhumuza and Carley Petesch