Stuck in the epicentre of a viral outbreak, young African students urge their governments to evacuate them.

Getting out of bed is hard for Thomas Kanzira.

"You wake up every morning and realise you are trapped," he says. "You keep checking your temperature - you can't help but wonder if you are infected but just have not started showing symptoms."

Kanzira, a 25-year-old Ugandan medical student, is among thousands of African students living in Wuhan, the central Chinese city of 11 million people currently under lockdown due to a rapidly spreading coronavirus. The disease, which is thought to have originated in Wuhan late last year, has so far killed almost 500 people and infected tens of thousands more, with cases reported in at least 24 countries around the world.

Kanzira first received news of the virus in mid-January when messages warning people to avoid crowded spaces began circulating on social media. But the real worry set in a few days later when universities announced they would shut down as the number of cases and deaths began to rise. 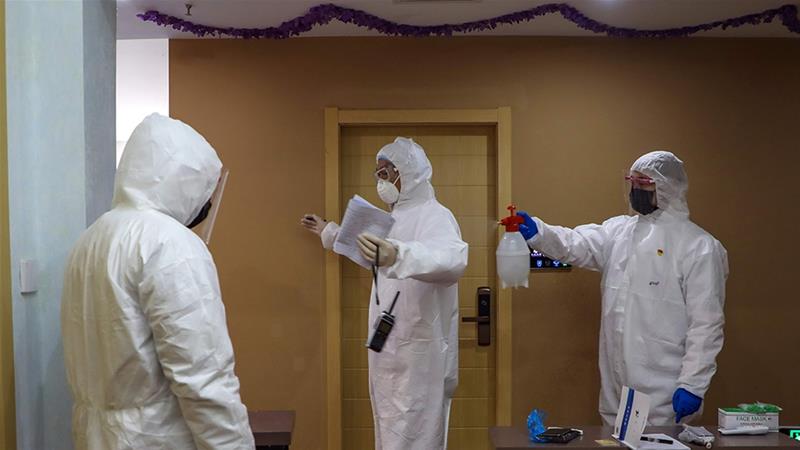 For Kanzira, life under quarantine is akin to a horror film.

"The streets are empty; it's like a scene from one of those Hollywood apocalypse movies," he says on the phone.

Kanzira has at times ventured out to buy necessary supplies, another draining experience in and of itself. "When going out I double up on masks and gloves," he says. "The minute I arrive back home, I spray my hands with bleach, wash them with anti-bacterial soap, then clean all the doorknobs I've touched."

What has made the entire situation more distressing is what he feels is inaction on the part of his country's authorities, in contrast to governments around the world that moved swiftly to get their citizens out.

"We first heard that the Americans were evacuating their citizens, then other countries followed suit - you watch your colleagues be evacuated and you feel helpless and abandoned."

Kanzira, a student at Jianghan University, says he and his friends reached out to various Ugandan government officials but were told to follow the guidelines provided by the Chinese government.

"They've basically left us to our own devices, they could fly us home and quarantine us for 14 days there," he says, referring to the maximum incubation period for the virus. "The lockdown will be in place here until the virus is contained, that could take months. Schools and offices will remain shut, what will become of us?"

This is a question asked by many other young people from African countries who have gone to study in China in recent years. The country has become the second-most popular destination for African students attending university abroad, with Beijing offering an array of scholarships amid deepening relations with many countries on the continent.

Earlier this week, Yangtze University announced that a male Cameroonian student had been infected with the virus, making the 21-year-old the first African to be diagnosed with the illness.

So far, Morocco and Egypt have moved to evacuate their citizens, while Algeria also chartered a plane to bring its people home, as well as nationals from Libya, Mauritania and Tunisia. Kenya this week also announced it would evacuate the 85 Kenyans stuck in Wuhan, but only when authorities lift the lockdown.

Based on local media reports, authorities in other African countries, including the governments of Zimbabwe, Sudan, Uganda and Zambia, are among those to have expressed confidence in the Chinese government's ability to keep their nationals safe, thus suggesting that evacuation is not on the cards. Instead, they have urged people to remain indoors and follow instructions given by China's authorities.

"The government say they cannot evacuate, this has left us really frustrated," says Rahab Elhadi Hkreldour Adam, a Sudanese national and student at Huazhong University of Science and Technology.

"The situation is getting harder day by day."

While fears around physical wellbeing may be at front of mind for those under lockdown, there is also the psychological toll.

"I feel like the walls are caving in around me; there are times where I think I am losing my mind," says Lucy, a Kenyan student who only gave her first name, adding that her mental health is deteriorating amid increased anxiety. "What happens when my antidepressants run out? How can the Kenyan government expect us to survive like this?"

Vimbai Murombo, a Zimbabwean student at Yunnan Technology and Business University, is equally frustrated with her country's government. The 20-year-old went to Wuhan from Yunnan province in southwest China to visit her cousin during the Lunar New Year holiday break.

Days before she was due to return, she received a notification from the airline informing her that all flights had been cancelled.

"It would really help if the Zimbabwean government could show that they care about us," she says, while also expressing fears of a potential food shortage. "With transport services terminated, it's difficult to get food, plus pharmacies are running out of masks. If the electricity went out at this apartment there would be no way to get help, it's terrifying. Mentally, I am not OK."

Tisiliyani Salima, a medical student and representative of the Zambian Student Association in Wuhan, is also concerned about the psychological effect.

"I've spoken to people who have not seen another person since the lockdown began, they are completely isolated."

For Salima, the rising death toll, coupled with a feeling of being abandoned, is hard to take. "Watching our classmates from other parts of the world be evacuated has left many feeling depressed and consumed by fear," she says.

Like many others, she spends her time talking to loved ones back home. "They just want us home; we really hope the government and the African Union will evacuate African citizens from here."

Meanwhile, medical experts from the continent appear divided on the matter of evacuation.

Kyeng Mercy Tetuh, a Cameroonian public health expert and epidemiologist, says African countries must bring their citizens home in a way that ensures "we don't inoculate the virus in the continent", while Tanzanian clinician Joachim Mabula says no evacuation should take place until "the issue is resolved, to avoid further transmission."

A source associated with Uganda's Ministry of Health says: "The decision of the government to not evacuate citizens is because they are aware that they are not prepared for the virus. However, the decision is rather short-sighted."

Back in Wuhan, Kanzira lets out a resigned sigh on the phone as he contemplates the future.

"If I die here they'll just cremate me, no family and no funeral. Let us go home, I would rather die there."