(CNN) With the economy in robust shape, Senegal's President Macky Sall might have anticipated a cruise to victory in his re-election campaign in the country's Sunday elections.

The incumbent has overseen a period of healthy growth and delivered several landmark infrastructure projects, including highways, train lines, and a new international airport.

Much of this development work has been underwritten by Chinese investment, which totals over over $1.6 billion, according to China's ambassador to Senegal Zhang Xun.

Sall, 57, benefits from a more substantial campaign infrastructure than his rivals and has stated his expectation of a convincing victory.A poll published in November put him on more than 45 percent of the vote - a clear lead over his rivals.

Another advantage for the incumbent is that two of his major challengers have been removed from contention. Senegalese President Macky Sall delivers a speech during a rally on February 19, 2019

.The former mayor of Dakar Khalifa Sall has been imprisoned for embezzling public funds and Karim Wade, son of former President Abdoulaye Wade, has been exiled to Qatar after serving three years in prison on corruption charges.

Opponents have objected that the charges are politically motivated, and Amnesty International said both men were subject to "unfair trials."Of the remaining candidates, former Prime Minister Idrissa Seck is making a third run for the presidency, but the most serious challenge to Sall appears to be the youngest candidate: Ousmane Sonko, 44, a tax officer turned whistleblower who is now running for President as a candidate for the Pastef Partie.

If Sall is the continuity candidate, Sonko is offering the opposite of business as usual.

Sonko, a relative newcomer to frontline politics, has led an energetic campaign characterized by packed rallies of passionate supporters and a dedicated social media following.The youngest candidate in the race has gained particular resonance with the nation's youth."He is very powerful among young people between 18 and 35 who are going to be voting for the first time," says political analyst Abdou Lo.

"He is the best on social media with hundreds of volunteers who are very active on Facebook and Twitter."Sonko is standing on a radical platform of fighting for Senegalese interests in international dealings and attacking corruption at home, often in robust terms.A video emerged during the race in which Sonko said that corrupt politicians should be shot, and he has subsequently refused to rule out bringing charges against the president.

One of Sonko's most striking policies is to replace the CFA franc with a domestic currency.Senegal, along with seven other Francophone countries in West Africa, has used the French franc since the end of the colonial era.The currency is pegged to the euro, and the countries that use it are compelled to keep 50 percent of their foreign exchange reserves in an account of the French treasury.

The franc has been the subject of ongoing controversy, decried as a relic of the colonial era, although there are fears that leaving could trigger instability as has been the case in neighboring Guinea."Sonko proposes a gradual, prudent and responsible exit from the franc CFA monetary system that is holding our economies hostage," says Mamadou Yauck, a Pastef Partie activist and deputy head of IT for the Sonko campaign.

Yauck says the franc is "putting our country in an uncompetitive position for exports and causing a deterioration in terms of trade."Sonko has also committed to renegotiating the contracts for oil and gas agreed with multinational companies, claiming the existing terms are exploitative. The candidate has some expertise in the field having written a book titled "Solutions" which excoriates the government for failing to secure a better deal for Senegalese resources.

The government has rejected such charges, and a statement from the president promised"inclusive management of the proceeds from the exploitation of oil and gas."But Sonko's arguments have endeared him to the youth and diaspora communities says Lo, and earned him comparisons with revolutionary figures."His radical speeches position him as a kind of new Thomas Sankara," the analyst says, referring to the radical former president of Burkina Faso - who also sought an end to the CFA franc. 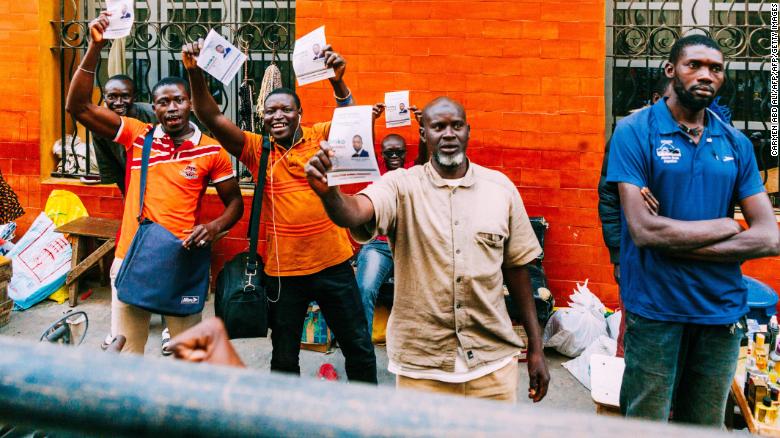 Supporters of Ousmane Sonko leafletting ahead of the election.

Opinion polls are banned during the election campaign in Senegal, but a survey in November put Sonko on around 15 percent of the vote - before Khalifa Sall and Karim Wade were officially disqualified.Sonko's supporters insist he can win against the odds. "We believe that our message has drawn a big and strong support across the country," says Yauck. "That enthusiasm will pay Sunday night."But independent analysts are skeptical.

"I would be amazed if Sall doesn't get a first-round victory," says political strategist and election consultant George Ajjan, who has worked on several previous campaigns in Senegal. He cites the absence of heavyweight rivals as a critical factor.Candidates need more than 50 percent of the vote for a first-round victory, or the contest goes to a run-off between the two leading candidates.

Even if Sonko falls short on Sunday, he may have made a lasting impact. "He has changed the landscape," says Lou, claiming that Sonko has bought the subjects of corruption and accountability in politics into mainstream conversations.Ajjan believes this election has come too soon for the young challenger but his time will come."The main thing for him is to build credibility, so he is not seen as a lightweight out of his depth," says Ajjan.

"If Macky wins, Sonko has to be like a shadow president...with credible alternatives and well-thought-out critiques of Sall's economic, political, and security policies.""(Sonko) needs to establish himself as a credible alternative and continue to build support. It might take him 20 years, but he can get there if he plays his cards right."